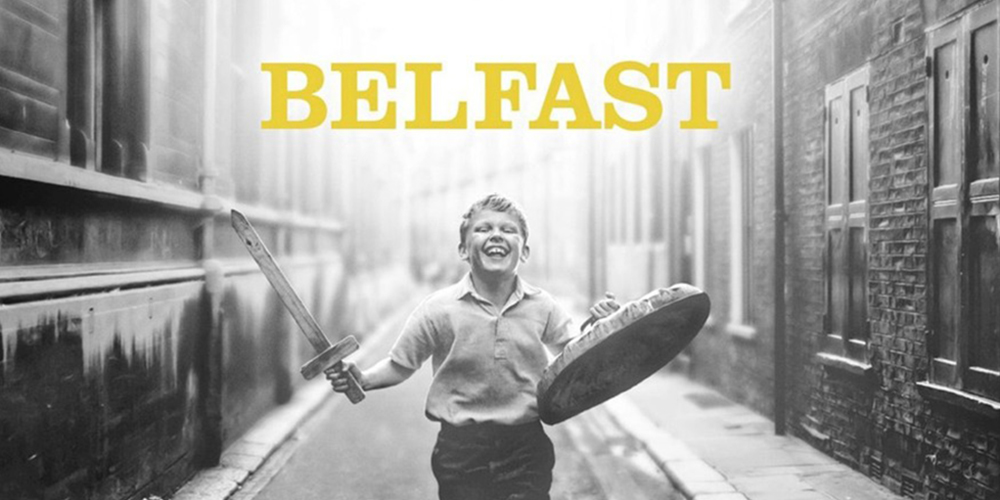 Belfast is a city in Northern Ireland. Belfast is also a movie, directed by Kenneth Branagh. Paula and I watched it Christmas Eve. That night in Belfast choirs sang: Glory to God. Peace on earth. Goodwill to all.

But, alas, in Ireland, peace is always fragile.

Belfast is based on Branagh’s and his family’s experiences one particular summer in a “mixed” working class Belfast neighborhood when he was nine years old. Catholic and Protestant families lived side by side. It was one big (and mostly happy) family. Adults sipped tea together. Children played together and attended a mixed school together.

Nine year-old Buddy had a crush on Catherine. He was Protestant. She was Catholic. He schemed to sit next to her in class and dreamed of marrying her someday.

And then in August 1969 all hell broke loose.

The next day Protestants assisted Catholics in repairing their homes. Residents hastily erected a barricade. Volunteers patrolled day and night.

But neither the troops nor the walls could prevent waves of retaliatory violence—bombings, gun smuggling, murders, assassinations, kidnappings, armed defiant marchers—over the next 30 years, killing 3,500, including children.

That era was called “The Troubles.”

The conflict is usually seen as another war of religions. But religion isn’t the primary provocation. The underlying provocations are economic and political.

But it can be overcome.

Daddy, do you think me and that wee girl have a future, asked Buddy?

Well, why the heck not?

You know she’s a Catholic?

That wee girl can be a practicing Hindu, or a Southern Baptist, or a vegetarian antichrist, but if she’s kind, and she’s fair, and you two respect each other, she and her people are welcome in our house any day of the week!

Bishop Tutu died last Sunday. I don’t know whether he got a chance to watch Belfast. But if he did, he would have smiled at that exchange and danced a little jig.

The Bible inspired King’s faith. The Declaration of Independence inspired his dream.

Ian Paisley was a hate-spewing Presbyterian minister. He made my blood boil.

In Ireland, peace is always fragile.

I just finished watching "The Beatles: Get Back". It's too damn long! And yet not long enough.