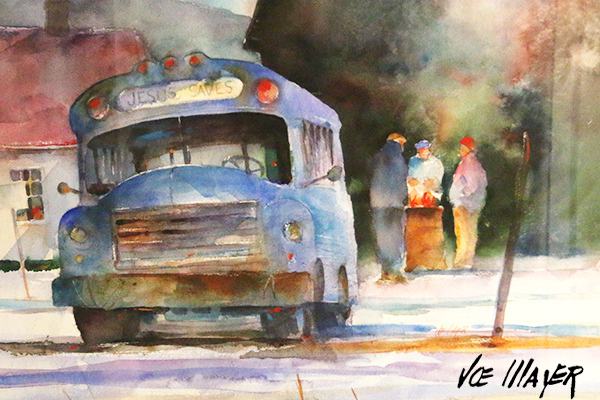 This past Tuesday the Magical Mystery Tour bus came for my friend. I didn’t think it would arrive so soon. I didn’t have a chance to say goodbye. If I had, I would have wished him bon voyage.

I just can’t accept that death is a full stop. Not for anybody. And certainly not for him. I can’t think of him as gone. I might as well think of the sun as gone.

I never had a dull encounter with him. Every encounter—no matter how short or long—was exuberant. His body radiated joy, even mirth. His soul never flickered. It’s hard to imagine him dead when I can’t even imagine him asleep. Ever.

Years ago, when he was downsizing for a move, he gifted me one of his watercolor paintings. A sagging school bus painted blue, parked beside a shabby house. Behind the bus three scruffy men warm their hands over a fire, flames flicking out of a rusted oil drum. Above the windshield in the destination panel of the bus are two faded words: JESUS SAVES.

He painted those men, the house, the fire, and the bus and still didn’t know. I don’t either.

The painting hung in my church office for 20 years. When I retired, I took it home. It’s here in this room beside me as I write.

I don’t know where the dead go or if they go at all. No one knows. But we can imagine. We can dream. We can sing. We can paint.

I don’t know if he got on that Magical Mystery Tour bus.

I imagine he did.

Each week I will post one of Paula’s photographs as the featured image on the home page. This week it’s Past and Present, Albuquerque, NM.