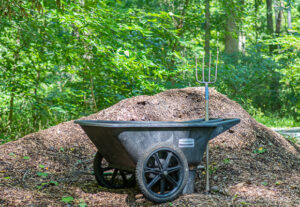 Last month one of my Albuquerque granddaughters worked on my nature trail nearly every day. Paula and her twin sister Angie—along with their father—had blazed the mile-long trail through our wooded eight acres in the summer of 2019. They spread the trail with a thin layer of wood chips. Over the past two years those chips were ground into the soil. Weeds took over.

The 12-year-old twins are not identical. While Paula worked outside on the trail, Angie worked inside on a tablet, designing “statuary” (gargoyles, perhaps?) to embellish the trail—someday.

For Paula it was a matter of pride to maintain what she had helped create. It was also a matter of making money. How much will you pay me if I re-chip the whole trail five inches thick? she asked me.

Paula relentlessly shoveled chips into a cart, hauled it, dumped it, and then spread the chips. Two days before she was to leave, a long stretch of the trail was still unfinished. So she hired her Boonsboro cousins, Wyatt and Eli (6 and 9), to help.

After hauling one load they asked, How much have we earned so far?

One load later. Now how much?

Look, boys, money’s important, but it’s not the most important thing. Do you know what is?

Well, yes. But that’s not quite it.

They briskly loaded up the cart, lugged it up the trail, and then another load and another, until the job was done.

We laid a ceremonial “golden chip.”

Hey, Grandy, after Paula goes home, can I come back sometime and build my own trail? I want to make something beautiful too.

PS: Two book signings are coming up soon at Four Seasons Books, 116 German St., Shepherdstown: Saturday, September 25, at 11:00 a.m. and 3:00 p.m. Each event will begin with a brief reading. Bring your copy of 80 Dispatches from the Devil’s Domain or purchase one at the store that day. This book and my first one, Let Love Arise, are available on Amazon (print and digital). Might not your kith and kin enjoy a copy too?