IS PUTIN A CHRISTIAN? 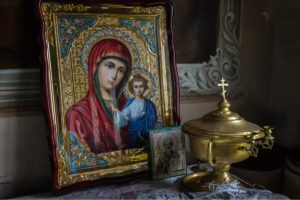 It is the last hour! As you have heard, the antichrist is coming.
1 John 2.18

Besides being an abominably heartless, ruthless, brutish, sadistic, narcissistic, and megalomaniacal small man of no stature, is Vladimir Putin also a Christian? Technically, yes. But then so are Dick Cheney, George W. Bush, and Donald Trump—as were Pope Urban II, Napoleon, and Harry Truman.

Jesus must be rolling over in his grave.

Putin’s father was an atheist. His mother was a Christian. She had her son baptized in the Orthodox Church. Putin claims to have ever after worn his baptismal cross around his neck, under his shirt (when he has one on).

Of course, it’s easy to wear the cross. Hard to carry it. Easy to be a Christian. Hard to follow Jesus.

Putin’s namesake, Vladimir the Great, was also a Christian. He originally embraced Slavic paganism, but in 988 he converted and Christianized the Kievan Rus people. And now his namesake is poised to pulverize Kyiv and all the Christians therein.

Putin is a disgrace to the name of Christ.

According to legend, Vladimir the Great lived the teachings of Christ. He practiced charity. He handed out food and drink to the less fortunate and went out to meet people who could not get to him. He was known to help his neighbors by carrying their cross of burden. He founded churches, established schools, protected the poor, and lived mostly at peace with his neighbors. Hence, he became known as St. Vladimir.

Putin is a disgrace to his namesake.

Is Putin a Christian? Technically, yes. Actually, no.

Jesus refused the sword, fed the hungry, healed the sick, soothed the tormented.

As it turns out, I was a little too kind to call Putin “a small man of no stature” in my post this past Wednesday (“Putin Is a Small Man”). I’ve been duly corrected.

Last Sunday Epiphanius I, leader of the independent Orthodox Church in Kyiv, called Putin “the Antichrist.”

The spirit of the Antichrist operates in the leader of Russia, the signs of which the Scriptures reveal to be: pride, devotion to evil, ruthlessness, and false religiosity. That was Hitler during World War II. This is what Putin has become today.

To which Orthodox Patriarch Krill of Moscow replied: No, he isn’t.

And so it goes.

A prayer for America in our time of darkness. Today for the people of Ukraine.