We will be back in some form.
Donald Trump, January 20 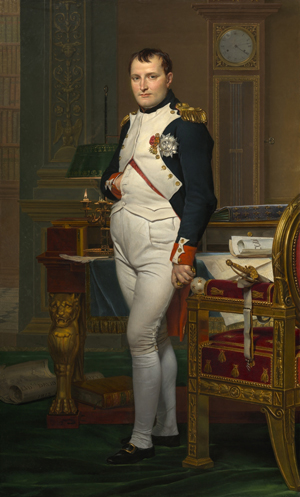 Trump is not Napoleon. The United States is not France. The 19th century is not the 21st.

Napoleon was born a Corsican, under the umbrella of Genoa. He was loyal to Italy until he saw greater opportunities with the French. He switched parties.

Corsica is not Manhattan. Paris is not Washington.

The Revolutionary government in France was unpopular. The masses were angry. Napoleon betook himself to Paris.

Napoleon was charismatic. He hoodwinked the electorate. He squelched the assembly of legislators. He was proclaimed First Consul. In December 1804, he crowned himself emperor—with the pope’s blessing.

The pope is not Jerry Falwell Jr.

In 1813 Napoleon straggled back to Paris from his catastrophic military defeat in Russia, claiming victory. Britain, Austria, and Prussia were poised to invade France. And just like that, fact trumped fiction. Yielding to public pressure—and with the guillotine glistening—Napoleon abdicated.

The European allies sent him packing to Elba, a small island off the western coast of Italy. To humor him, the British granted him a pension, a sizable staff, and a title: Sovereign of Elba.

Louis XVIII now ruled France. The reign of the Bourbons was restored. But it lacked luster (and liberality). The people grumbled. The grumble reached Elba.

Napoleon slipped off the island and back to France. He wended his way to Paris. Village after village cheered him on. The savior of the nation had returned. The army defected from Louis XVIII one battalion after another.

In Paris Napoleon received a hero’s welcome. He reclaimed his crown, rebuilt the army, and set off gallantly to Belgium to crush the forces poised to remove him again. He met his Waterloo. He hobbled back to Paris, claiming victory again.

But the French had wised up. They’d seen enough. The defrocked (and corpulent) emperor was exiled to St. Helena. He never came back.

Impeachment is not exile. Mar-a-Lago is not St. Helena.

The long, cold, lonely winter is over.

On Wednesday America found what it had lost—sheer joy. We saw smiles returning to faces—from sea to shining sea.