NO MASS FOR JOE! 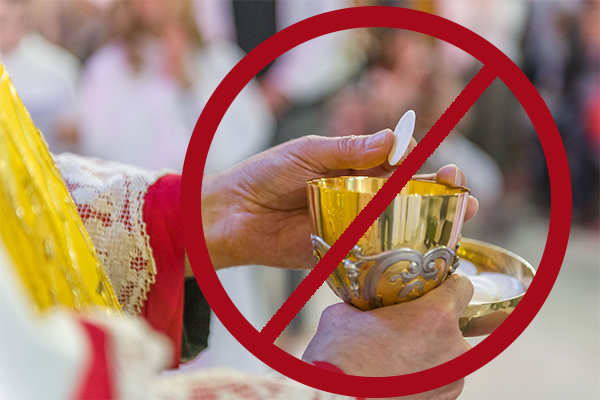 Hey, American Catholic bishops! Please don’t give Joe Biden the body and blood of Christ. He’s already got too much Jesus in him.

I mean, look at him!

He’s surrounded himself with women, people of color, and homosexuals. He just made Juneteenth a national holiday. He wants everybody vaccinated. He wants to save the planet. The suffering of others makes him weep, as it did Jesus at the tomb of Lazarus.

So please don’t give him any more of the body and blood of Christ. God help us if he gets more Jesus in him.

Hell, he might take our loaves and fishes and give ’em to the Ethiopians.

He might distribute condoms to everyone vulnerable to AIDS.

He might open up the borders and let all the little children come in—for of such is the kingdom of heaven.

He might declare Russia, China, and Iran allies because, well, that’s what happens when you love your enemies. Love disarms them. (I myself would hang on to a few missiles, just in case love doesn’t disarm them.)

He might storm into Wall Street—and the Vatican—kick over a few money-laden tables, coax the wealthy out of their lofty towers, and persuade them to make reparations to those they have defrauded, as Jesus did with Zaccheus.

He might denounce the Republicans as white sepulchers, just as Jesus did a certain self-righteous party in his day. (Being Christ doesn’t mean you’re nice all the time. Jesus left that role to Mr. Rogers.)

And, alas, he might scold us for throwing stones at the Former Occupant of the White House (The one without sin, cast the first stone) and pronounce him forgiven. Go and sin no more! (I myself would hang on to a few stones, just in case “sin no more” doesn’t work.)

Once upon a time kings, queens, and emperors feared bishops and popes. Holy Roman Emperor Henry IV knelt in the snow for three days at Canossa in January 1077 awaiting forgiveness from Pope Gregory VII.

Joe Biden is not a king or an emperor. He’s president of a republic, elected by the people to serve the people, not CEOs or bishops. He doesn’t need to truckle to anyone. He knows where he stands.

Any bishop or pope should feel honored to stand with him and commune.

PS: Don’t keep your friends in the dark. Let them know (before it’s too late) that 80 Dispatches from the Devil’s Domain and Let Love Arise are now available on Amazon—print and Kindle formats.