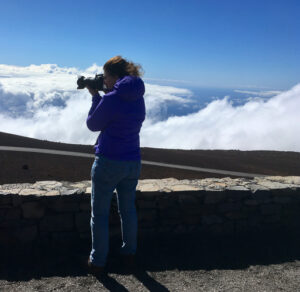 Paula is my wife. So you might think I’m her “passion.” Well, I am. And she’s mine. But that’s not the passion of this post.

(No blog could do justice to our passion. It would take a book. Nora Roberts would have to write it.)

Today I write of Paula’s passion for photography.

(Okay. You write about me. And I’ll shoot you. Fair enough?)

Today is Paula’s birthday. And today I’m happy to announce that she just won her first major prize.

I know, I know, “major” is a relative term. But consider this: Seventy-two photographers from six states submitted 570 photographs to the 35th Annual Frederick Camera Clique juried exhibition and only 78 photos from 31 photographers were selected.

Paula watched the award ceremony online. When the Honorable Mentions were named and she wasn’t among them, she said to herself: Oh, well, maybe next year.

And then the two second-place awards were announced. Paula won Best Monochrome.

I’ve seen Paula pursue several passions. Whatever the passion, she works hard to get better at it.

When I wooed her away from San Jose State in 1976, she was a piano major. Piano was one of her first passions. She worked hard at it. But suddenly, there I was with a better offer: Come visit me in West Virginia. She did. She purchased a one-way ticket!

(See what I mean about Nora Roberts?)

Paula brought along her father’s violin. As long as she was going to West Virginia, she figured she’d learn how to fiddle. The violin became her passion. She took lessons, practiced a lot, and got better and better.

In late 2001 while in Europe, we happened to visit toy stores in Florence, Barcelona, Paris, and Dublin. Upon returning home, Paula resolved to establish a European-type toy store in Shepherdstown. She imagined, researched, and worked hard to make it a beautiful creation. “One Two Kangaroo” became a popular destination. But alas, retailing itself wasn’t her passion.

She went back to teaching for a while and retired.

(When she was just a little girl, her father handed her the family’s Brownie. Take a shot, Paula.)

Paula picked up her camera and started shooting. She took classes online, joined clubs, went to workshops, researched techniques, tried this and that. And as you now know, her passion blossomed.

See how easy that is?