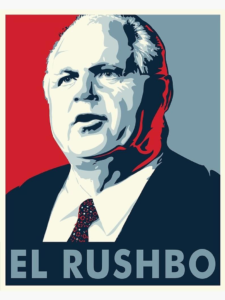 Greetings, conversationalists across the fruited plain. This is Rush Limbaugh, the most dangerous man in America, with the largest hypothalamus in North America, serving humanity simply by opening my mouth, destined for my own wing in the Museum of American Broadcasting, executing everything I do flawlessly with zero mistakes, doing this show with half my brain tied behind my back just to make it fair, because I have talent on loan from God.

The most dangerous man in America is dead. Rush Limbaugh died a week ago Wednesday.

Ding dong the Rush is dead.

He touted family values. He believed in marriage as long as it was between a man and a woman. He was a monogamist. He had four wives—one at a time. He sired no children but spawned Dittoheads by the millions.

He spawned disdain. He spawned vulgarity. He spawned lies and conspiracies. He spawned bigotry, misogyny, racism, and xenophobia. He spawned a swamp, a president, and an insurrection against the capital.

His voice was captivating.

In the late ’80s I chanced upon his radio show while driving back and forth to the Hagerstown YMCA. I was captivated by that voice.

He promoted Snapple tea. Once on a visit to the Blue Moon in Shepherdstown I ordered a bottle. I don’t like tea. Hot or cold. Still, I bought it.

Yes, I was shocked often. Yes, I recoiled often, but I tuned in more than once. (May God have mercy on my soul.)

Rush Limbaugh was adored by 45 million Americans, including the former president of the United States, who awarded him the Medal of Freedom a year ago.

Rush Limbaugh died at his home in Palm Beach, Florida. Florida’s governor ordered flags flown at half mast. This is the same governor who had to be cajoled into expressing sympathy on the passing of John Lewis.

Whom we mourn shows our colors.

Rush is dead. I’m not mourning. Nor am I dancing on his grave.

The most dangerous man in America may be dead. But there’s another dangerous man with a captivating voice in the same neighborhood.

And that’s not funny.