Think how stupid the average American is and then consider half are stupider than that.
~George Carlin

A raging mob stormed the Capitol on Wednesday, January 6. Honestly, I’ve felt like doing that myself numerous times over the past 50 years. Alas, over these past four years I’ve even felt like storming the White House just about every other day. I’ve felt like punching a few faces and wringing a few necks in both places.

I know about strong feelings. I have many. But I don’t act on them. At least not all of them.

I’d like to think I’m not stupid. I try to reason things out a bit before acting.

Anger is a powerful force. It’s a reaction to injustice, real or perceived. Nothing wrong with that. We can’t help our reaction. It’s normal, it’s healthy, it’s human.

Reactions are spontaneous. Responses are not. We can manage them.

Despite my strong feelings of anger and disgust, I would never invade the Capitol—unless the entire West Virginia legislature somehow suddenly occupied both houses.

January 6 was the Day of Epiphany. Epiphany commemorates the arrival of wise men from the East bearing gifts to Jesus in Bethlehem. As far as I can tell there wasn’t a single wise person in that giddy mob on Wednesday. 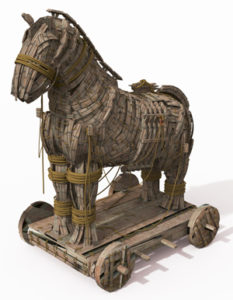 (Note to insurgents: If you manage to lure a Trojan horse with a hollow wooden head into the capital of the United States and lurk in its bulging belly for four years, you’d better have a plan when you roar out of the horse’s ass—something other than milling around, posing on parapets, commandeering chairs, defecating in hallways, giggling up your sleeve, and waving “Jesus Saves” signs.)

(Note to Jesus: Please save us from your people!)

History is peppered with attempted coups and insurrections. But none was as dumb as this one.

At least the British assault in 1814 had battalions. This one had buffoons.

It may have saved our republic.