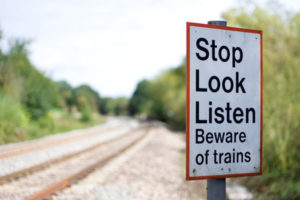 My grandson Wyatt loves trains. When he sees or hears a train his body quivers.

Once when he was two going on three we were in town for story hour at the library. We were an hour early, so we took a walk.

We walked up King Street, then down Washington, past the bank, and past the Town Run Tap House. We stopped at the railroad tracks to look and listen. “Grandy, I hear a train coming.” I took his hand.

We stood still, looked both ways again and again. We listened for a while and then a little more.

I don’t hear a train. There’s no train coming.

He didn’t argue. We crossed the tracks hand in hand and walked behind O’Hurley’s General Store toward Tommy’s Pizza, crossed over those tracks and strolled up Rocky Street to Cullison Park.

I sat on a bench and checked my watch. Thirty minutes to go before story time.

Wyatt dashed from swings, to monkey bars, to slide. Back and forth again and again, zigzagging like a squirrel on cat nip.

I got worn out just watching. I checked my watch.

Time to go, I called out.

“One more, one more!” he yelled and flew down the slide one more time. And then one more.

We set off for story time.

We strolled up Mill Street toward German Street. Just as we got to Tommy’s, a train rumbled over the tracks. Wyatt stood transfixed until the last car zipped by.

He took my hand and walked me to the library for story time.