On the second day of this new year I walked the battlegrounds of Antietam. My grandsons merrily dashed up and down rolling hills and gleefully splashed in mud puddles, despite their mother’s earnest pleas.

I’ve walked those grounds many times. But this time was different. I saw and heard things I hadn’t seen or heard before.

(Not all epiphanies are sunny.)

Mother, tonight I sleep in the mud. I hear artillery in the distance. I don’t know if I’ll ever see you again.

I saw piles and piles of dead young men. There. There. And there. They had dashed across hills and fields into a barrage of fire. Nearly all were baptized Christians. Each side said God was on its side.

Women on both sides—Clara Barton in the North and Cornelia McDonald in the South and 10,000 nameless others—stanched bloody wounds, soothed fevered brows, moistened parched lips, and consoled the dying. Nearly all were baptized Christians. 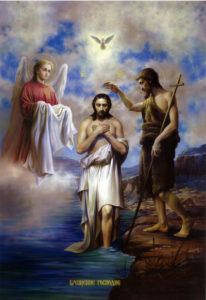 Today is the Baptism of Jesus Sunday. It’s a minor holiday on the liturgical calendar. There are no gift exchanges. There are no candy baskets. No red helium balloons as on Pentecost.

As told in the gospel, the baptism of Jesus was spectacular. The heaven’s opened, a dove descended, a voice spoke. “You are my beloved son. Today I have begotten you.”

(Maybe there could be doves on the Baptism of Jesus Sunday. Lots of doves.)

Jesus would heal the sick, feed the hungry, soothe the tormented, welcome outcasts, and love his enemies even if it killed it him. It did. Love didn’t win that day.

He was crucified, dead, and buried.

Jesus’s body lay a-moldering in the ground, but the truth went marching on, right onto the battlefield of Antietam and so many other godforsaken places.

Mother, tonight I sleep in the mud. I hear artillery in the distance. I don’t know if I’ll ever see you again.

And then a nurse knelt beside him in the mud and wiped his brow.

God was on both sides.

[APOLOGY. The comment window was unavailable last Sunday morning for “Star of Bethlehem.” It became available later in the day. If you meant to add a comment but couldn’t, you can do so here. I personally respond to all comments but generally post only 10 or so because of space limitations. Those 10 comments become part of the archives. Thank you one and all for your interest in my work. Randy]