BLUES FOR THE MUSE

A writer is one for whom writing is more difficult than it is for other people. Thomas Mann 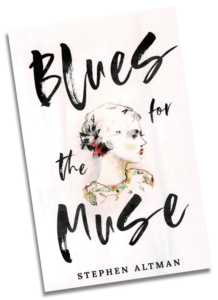 Last Saturday I went to a garden party to celebrate the publication of Steve Altman’s new book, Blues for the Muse. It’s a homage to John Keats.

Fifty years ago Steve stumbled upon the poems of John Keats (1795–1821). It was adoration at first sight. Steve made pilgrimages to Keats’s grave in Rome.

What more could he do to honor this brilliant romantic poet who died of tuberculosis at age 25?

Blues for the Muse is the answer.

It took 50 years to incubate, eight years of hard labor, several midwives, and lots of pushing, but at last it arrived—200 years after Keats’s death.

Blues for the Muse consists of 202 sonnets.

I won’t say I hate poetry, but I don’t like it very much. One poem gets me through a whole year. Easily.

At that pace I wouldn’t live long enough to finish the book. But out of respect for my friend, I decided to give it a fair shake.

I began by reading the first sonnet aloud. Much to my surprise, I was hooked after just 14 lines. (Sonnets by definition are 14 lines.)

I didn’t have to squint, squirm, or sweat. Reading it was a breeze.

As it turns out, it isn’t a collection of 202 random sonnets. It is one continuous story. It lured me further and further in, sonnet by sonnet, page by page.

A forlorn man from Queens sits on a bench beside John Keats’s grave in Rome. He spies a beautiful woman in an azure dress at a funeral one grave over. He sidles up to her. She runs. He pursues her. They make torrid love in a hotel room. Next morning two armed thugs bust in to kill him. (Turns out she’s the wife of a mafia boss.)

Don’t kill me, he pleads with one. I can see you have a face meant to be in the movies. I’m going to make one and you’ll be in it.

His life is spared. (For the time being.)

No wonder that within three weeks Blues for the Muse had 10 five-star reviews on Amazon. By comparison, after three months, my new book, 80 Dispatches from the Devil’s Domain, had none.

No, I’m not jealous. But, I will say, the Devil’s got the blues.

BREAKING NEWS!! Two reviews have just been posted. Click here to read what the critics are saying—and please feel free to add your own review!