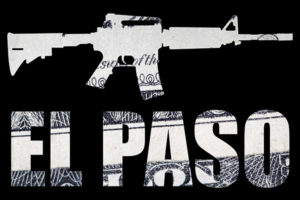 I read the news today, oh boy. A crazed man killed 22 in El Paso and another killed nine in Dayton. And though that news was very sad, thousands more were killed or left to die that same day in a hundred other places. Those deaths didn’t make the news. When you’re watching the circus, you miss a lot.

In case you hadn’t heard, Cain killed Abel, too. That’s not news. And it’s not history. It’s a mythic folk tale, which means it never was but always is.

Cain wasn’t a “killer ape.” He wasn’t a hunter. He grew vegetables. But the world wounded him. Rage smoldered within.

Cain is in all of us.

Cain killed his brother and then went on to build the first city, civilization, you might say. It produced art and technology, music and tools, vaccines and solar panels and, of course, guns.

Humans make things. It’s what we do. We’re ingenious.

As George Carlin put it: “The very existence of flamethrowers proves that sometime, somewhere, someone said to themselves, You know, I want to set those people over there on fire, but I’m just not close enough to get the job done.”

Someone got the job done.

And now that we see so many places on fire, we need to get another job done. And we can. We’re humans. We’re ingenious. And devious. We mess up a lot. But if we don’t fix it, nobody else will.

And that, by the way, is pretty much Humanism 101. It’s one way to see things. But it’s not the only way.

PS—in case you hadn’t heard, I’m offering two classes at Shepherd University this Fall. “Reading the Bible through the Eyes of Darwin” and “Jesus Before Christianity.” Full descriptions and a registration link are under “Classes” on the menu bar.