IDAHO ON MY MIND

Everybody has taken sides over the COVID vaccination. To get or not to get.

I mean it’s like throwing a lifeline to a drowning person who refuses to grab it because they don’t like the looks of the person who tossed it or think it might scratch their hands.

We could say: Well, let them drown in their stupidity! But these are friends. I’m guessing you have such friends and kin as well.

Live and let die is not the answer.

This past August, Paula and I flew out to the Northwest to visit family and friends. In California, we were required to wear masks in all public places. Same with Oregon and Washington. And then we crossed into Idaho to visit Paula’s brother and his wife, recent—and vaccinated—immigrants from California. 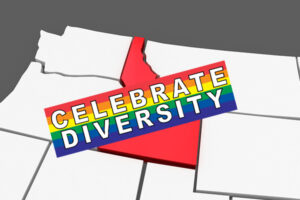 Welcome to Idaho. Birthplace of the Aryan Nation!

Sorry. That’s not the state motto.

The state motto is Esto Perpetua (“Let it be perpetual!”). I’m not sure what “it” is, but I guess “it” won’t be changing anytime soon.

In case you didn’t know, Idaho is ranked as one of the least diverse states in the nation. Sure enough, you look around and swear you’re in Sweden.

So I must admit I was surprised when I spied at a distance a bumper sticker that read CELEBRATE DIVERSITY.

How cool is that? At least one Idahoan is speaking out against White supremacy. And where there’s even one, there’s hope. Idaho can change. Idaho will change. Idaho won’t be Republican perpetually.

I got closer and closer to the car and saw that the sticker sported images. Under CELEBRATE DIVERSITY was an array of assault weapons.

While walking around Coeur d’Alene, Paula and I came upon a park with hundreds of maskless people, packed together for a concert. They were having a good time. Unsafe. Unprotected.

Two weeks after we returned home, I read the news: Idaho had nearly run out of ICUs.

I could say: Serves them right. Live and let die!

I don’t know what the answer is, but that’s not it.

Let’s keep throwing out the lifeline.

PLEASE DO ME A FAVOR. Four Seasons Books has sold 98 copies of my book—98—just two short of 100. So close!! After the big launch in June, sales stagnated in August. Twenty books languish on a shelf like abandoned kittens in an animal shelter, hoping and praying someone will claim them. If they’re not claimed by the end of October, they’ll be shipped back to the warehouse and shredded! Don’t you think someone you know would get a kick (and maybe some inspiration) from 80 Dispatches from the Devil’s Domain? Here’s an idea: Give one as a Halloween gift? Order here.