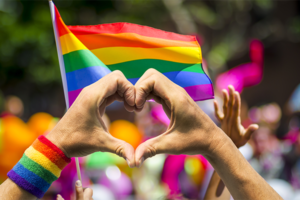 It’s gay pride month. Lots of parades. A few years ago I attended my first while visiting my twin granddaughters in Albuquerque.

We found ourselves standing next to a group shouting and waving large signs. JESUS HATES FAGS. HOMOS GO TO HELL. REPENT OR PERISH. One of the bellowing men had a gun on his hip.

We moved away but not before the “God squad” spotted us and turned to call us “slime bags” and “horrible parents deserving hellfire.” As they saw it, we were exposing children to a despicable display of immorality.

Other than that, Reverend, how was the parade?

(My granddaughters remember it as the “Candy Parade.”)

The parade rolled on even as that gaggle of self-righteous men kept yelling threats and condemnations in the name of Jesus.

And then something happened.

A colorfully festooned marching band entered the parade route and stepped sprightly down the boulevard. When it came to the site of the frothing protesters, the band stopped and pivoted smartly toward those hate-filled faces.

The director lifted her arms and tapped her baton. The band began to play: Jesus loves me this I know, for the Bible tells me so.

Then the band politely waved at the protesters, blew kisses, pivoted, and marched on down the boulevard.

I felt tears running down my cheeks. (Yes, I have issues with Christianity but not with Jesus!) That’s it, I thought. That’s what the gospel of Jesus is all about—a creative, nonviolent, compassionate response to hatred.

I saw one example that day. And I’m pretty sure it’s not the only way to meet hate with love.

Let us count the ways.

PS: I hope to see and meet many of you at the book launch & signing event, Sunday, June 13, at 2 p.m. Bavarian Inn gazebo (or in the large tent, in case of rain). Copies of 80 Dispatches from the Devil’s Domain are available in advance at Four Seasons Books or on-line here.