ODE TO THE BIKE 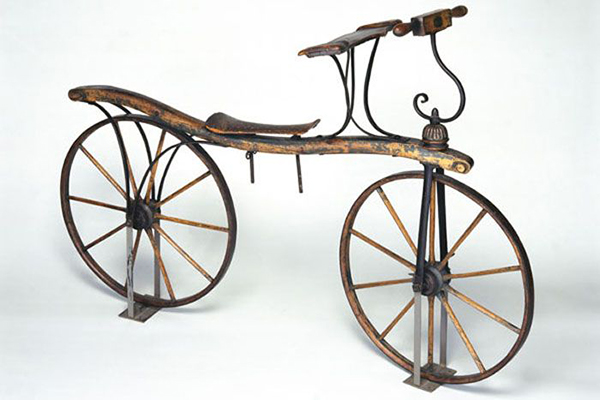 I write these things at a certain time on a certain day and that certain time this week was threatened by an old friend who wanted to go on a bike ride during my blog writing hours. I know I mustn’t give in to temptation or my work will suffer. It might not get done.

But he is a good friend.

I notice it leaning against the stair rail. It’s a marvel of human ingenuity.

First, you need to invent the wheel.

Wings, fins, webbed feet, and lenses are found in nature. People noticed them and fabricated imitations.

Wheels are not found in nature—unless you count logs, certain stones, or a dung beetle’s prized turd ball, which rolls like a wheel. It’s not likely a caveman saw that and thought “wheel.” The turd ball evoked possibilities, but “wheel” wasn’t one.

The first wheel was fabricated about 6,000 years ago. It was around for millennia before someone thought to affix an axle so two wheels could roll in the same direction. And thus, the cart.

And then in 1817 a certain Baron Karl von Drais paired two wheels, front and back, and connected them with a wooden frame, ridiculed as “the dandy horse.” Soon after came pedals, chains, gears, pneumatic tires, aluminum, and the Tour de France.

In the late 19th century bicycling clubs formed in Europe and America. Those elite clubs lobbied for smooth, paved roads. Later, automobiles would hog those roads built for bikes.

The bicycle is the most efficient human-powered means of transportation. There are twice as many bikes as cars.

But it’s more than a marvelous machine.

Experiments done in Uganda, Tanzania, and Sri Lanka show that a bicycle increases a poor family’s household income as much as 35%.

For women, the “noiseless steed” brought liberation and bloomers. Susan B. Anthony called it the “freedom machine.”

“I think the bike has done more to emancipate woman than any one thing in the world,” she said. “I rejoice every time I see a woman ride by. It gives her a feeling of self-reliance and independence. The moment she takes her seat, away she goes, the picture of untrammeled womanhood.”

Work can be postponed. Living can’t.

I said yes to my friend.

I took my seat. Away I went. Untrammeled.