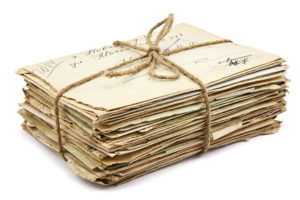 Funny how you can set something down meaning to get to it the next day, and then 40 years go by. A life can go by like that, I suppose, before you get to it.

The box was stuffed with letters. The earliest was postmarked 1967. I was 20 years old, a junior in college.

Funny, I don’t recall writing letters. Not one. Looking back I can’t see myself doing that—sitting down at a table, lifting a pen, writing on paper, folding it, tucking it in an envelope, sealing it, stamping it, and dropping it in a mailbox.

I just can’t see myself doing that. The box says I did just that.

Every time I moved, I took that box along—from Youngstown to Wheaton to Pasadena to Shepherdstown. I never re-read them. I just took them along, put them under my bed, or tucked them in the back of a closet like ashes in an urn. A memorial to friendships. A stone to touch.

I slid down a rabbit hole into another world. We were all so very young then. Our nation hummed. The future was wide open. I read another. And one more. And one more.

I put the lid back on and climbed out of the hole, back into this world, back into now.

I don’t know if I will ever touch those letters again. I know I won’t toss them out. After all, the box isn’t so big, and my closet has plenty of room. Besides, there’s still a whiff of perfume on a few of those letters.