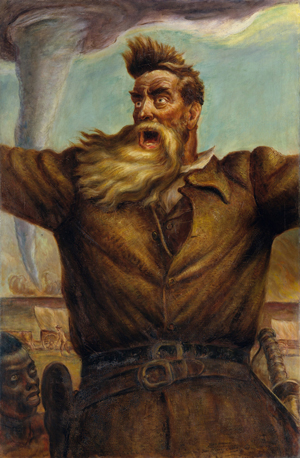 Seventy-three million Americans (10 million more than last time!) voted for the president even after I plainly stated on this site weeks ago: For once the choice is not between greater and lesser evils. This time it’s black and white. Good versus evil.

How could they? Are they blind or demented?

Who let such people in our country? Where was the wall when we needed one? Where’s a basic intelligence poll test when we need one?

Please answer this question before I give you a ballot: Was John Brown sane or insane, saint or villain, liberator or terrorist?

And the answer is …?

Therein lies the problem. Who’s to say? Who would be right?

Every morning before I take on the news, I take up a book—biographies usually. Recently I read about the lives of three African Americans who migrated out of the lynching Jim Crow South in the early 20th century in The Warmth of Other Suns, by Isabel Wilkerson.

As it turns out, half the nation saw John Brown one way, the other half another way, just as our nation is divided in its perception of the president. Messiah or Mussolini?

No, the president is not John Brown. Brown conceded defeat graciously. Even Henry Wise, governor of Virginia, considered Brown a “true gentleman” (but still sent him to the gallows!).

There are, however, similarities between Brown and the president.

Each dominated national news for a long spell. Each forced the nation into polarized camps. Each has been deemed a tyrant and/or insane.

Pottawatomie John Brown of “Bleeding Kansas” led a murderous attack on Harpers Ferry, and still his Northern base supported him. Not all, but many. Thoreau, Emerson, and Henry Wadsworth Longfellow did.

Abraham Lincoln also denounced Brown’s violence. Lincoln said persuasion would work better. And then Lincoln did what Brown did at Harpers Ferry. He invaded the South with armed forces.

The nation was bitterly divided. Each side touted different values. Each saw the other as enemy. Each claimed God was on its side.

I would never claim God is on our side.

I’m just glad our side is right.