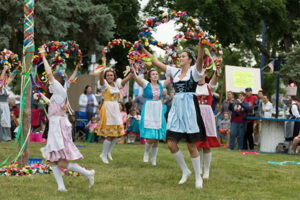 The world is too much with us; late and soon,
Getting and spending, we lay waste our powers;
Little we see in Nature that is ours;
We have given our hearts away, a sordid boon!
This Sea that bares her bosom to the moon;
The winds that will be howling at all hours,
And are up-gathered now like sleeping flowers,
For this, for everything, we are out of tune;
It moves us not.—Great God! I’d rather be
A pagan suckled in a creed outworn;
So might I, standing on this pleasant lea,
Have glimpses that would make me less forlorn;
Have sight of Proteus rising from the sea;
Or hear old Triton blow his wreathèd horn still.
—William Wordsworth

Enough of Putin and COVID and Disney(gay)world.

THE WORLD IS TOO MUCH WITH US.

That be Wordsworth. I betook myself to his sonnet and hied me away to the bosom of Mother Nature. I stood on a lea thrashed by the wind. I heard the sea. I saw children dancing around a maypole.

Great God! Today is May Day!

This year May Day falls on Sunday. A pagan delight.

Sunday is named after the sun. (Glory be to Brother Sun.)

Monday is named after the moon. (Glory be to Sister Moon.)

Tuesday after Tiu, the Germanic version of Mars, the Roman god of war. (Enough of the glory stuff.)

Wednesday after Woden, the Germanic version of the swift Roman god Mercury.

Thursday after Thor, the Nordic version of the Roman god Jupiter.

Friday after Fria, the Teutonic version of the Roman goddess of love, Venus. (TGIF!)

And Saturday is named after Saturn, the Roman god of agriculture.

May Day is a good day to let your inner pagan return to the bosom of Mother Nature. And if by chance Wordsworth’s sonnet was too opaque for you, maybe this song will be less so:

Blow up your TV, throw away your paper, go to the country, build you a home. Plant a little garden, eat a lot of peaches, try an’ find Jesus on your own.

You probably won’t find Jesus, but you might find John Prine’s songs. And that will be a delight any day of the week.