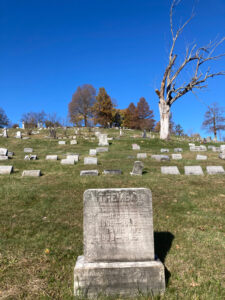 Last Saturday I saw my grandfather’s tombstone for the first time. Jacob Tremba died in 1922 at the age of 53, leaving a wife and 10 children behind. My father, Michael, was 9 years old.

Jacob emigrated to America from Austria. He settled in Morrell, a small enclave of immigrants outside Connellsville, Pennsylvania. He took a job in the coal mines.

The circumstances of his death were murky. My father knew only that Jacob had died of “complications” from a mining accident.

But my cousin John, a graduate of the University of Pennsylvania, doesn’t like murky. He figured out how our grandfather died. He was murdered.

Last weekend I drove to Connellsville with Paula and our daughter, Amanda. My cousin gave us a tour of the old coalfields and company towns. We saw former company houses, company churches, and company stores.

He told us of the plight of mining families—free housing, yes, but with strings attached. Eviction without recourse. Pay in scrip, not dollars. And scrip was good only at the company store.

You load 16 tons, what do you get? Another day older and deeper in debt. St. Peter don’t you call me ’cause I can’t go; I owe my soul to the company store.

Jacob refused to be paid in scrip. He’d take only dollars. He refused to live in a company house. He built his own. He refused to tolerate unsafe conditions and unfair wages. He unionized.

One day a shaft roof collapsed on him, fracturing his pelvis. He was carried home on a stretcher. A year later he returned to work to cheers from his fellow miners.

A few days later he fell gravely sick in the mine and soon thereafter died at home. My father remembered that part.

Mine officials, including the company doctor, said he had drunk noxious, standing water. Yet no experienced miner would do such a stupid thing. Like every other miner, he carried water in his lunchpail.

As it turns out, company goons poisoned his water. No charges were brought.

At great personal sacrifice, coalminers provided light, heat, and energy to this country. Coal fueled industry and many modern conveniences. We owe them.

But the era of coal is over. There’s no going back.

Let’s raise a monument to coalminers in our nation’s capital and then dig in to make unions stronger, workplaces safe, wages fair, and our country greener.

HEADS UP: In order to prevent an increasing number of “bot-spams” I have added a filtering device before you submit a comment. I’m sorry for the inconvenience but I hope you will continue to make comments anyway. I appreciate each and every one of them.